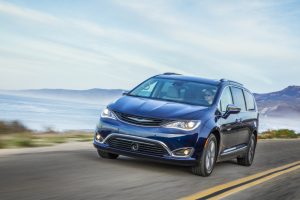 Although the All-New 2017 Chrysler Pacifica Hybrid has only recently become available for purchase or lease, the innovative hybrid minivan from the Chrysler Brand is already making waves: Editors at Wards Auto have named its engine, the 3.6L Pentastar® V6 hybrid propulsion system, one of the ten best for 2017.

As the driving force behind the All-New 2017 Chrysler Pacifica Hybrid, the 3.6L Pentastar V6 hybrid propulsion system helps the minivan achieve a remarkable fuel-economy rating of 84 MPGe*, reflecting its combined city- and highway-cycle performance in electric mode only. The all-new hybrid vehicle from the Chrysler Brand also excels on two other efficiency fronts, realizing a total driving range of 566 miles† and an electric-only range rating of 33 miles‡.

In the 22-year history of Wards 10 Best Engines, eight engines produced by FCA US LLC and its predecessor companies have accounted for 17 awards, including the following:

The All-New 2017 Chrysler Pacifica Hybrid is now available for purchase or lease. Order yours at a BusinessLink dealership near you.