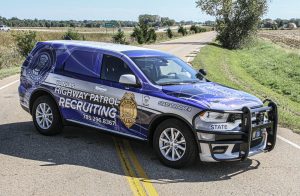 “A veteran trooper told me it’s one of the best vehicles he’s ever been issued.”

The vehicle that Captain Brian Basore, Fleet Operations, Kansas Highway Patrol (KHP), is referring to is the Dodge Durango Pursuit, a relative newcomer in the world of law enforcement, yet a vehicle that is already proving itself on patrol after patrol.

“Part of what he likes is the roominess,” Captain Basore says of the veteran. “He’s one of our taller troopers.” It’s also the vehicle’s drivability, the captain contends. Basore hears often that the Durango Pursuit handles surprisingly well not just for a sport utility vehicle but for any vehicle. “Troopers have told me it drives a lot like the Charger. That’s saying something.”

The Kansas Highway Patrol took delivery of their first Dodge Durango Pursuits in January 2019, not long after the vehicles became available for purchase. KHP operates a fleet of about 700 vehicles total, approximately 230 of which are Dodge Charger Pursuits, and 180 of which are now Dodge Durango Pursuits. Based on the Durango’s growing popularity in the field, not to mention the easy, pain-free purchasing experience, Captain Basore says KHP plans to acquire more of them as older vehicles of different makes and models cycle out of service.

“There was some reluctance among troopers when we first acquired the vehicles,” Captain Basore admits. Adopting a new service vehicle is no small matter to the highway patrol, after all, not when so much of the job depends on vehicle performance. Specifically, troopers had concerns about the vehicle’s top speed and weren’t sure they would like the position of its shifter. “Those concerns have dissipated,” the captain says. “The fact it handles so well has a lot to do with that.”

Troopers also like the Durango’s appearance. It turns out prospective troopers do, too. “We use it in our recruitment efforts,” Captain Basore says. “People really like its aggressive, intimidating look, especially with the push bumper. I get asked at least twice a week what kind of vehicle it is.”

Does that mean Captain Bosare drives a Dodge Durango Pursuit himself? It does. He likes it for the same reason many of his troopers do, the fact it handles like a Charger and has all the extra room. “It’s the best of both worlds.”

Visit the FCA Law Enforcement website or call us directly (1-800-999-3533) to learn more about the Dodge Durango Pursuit.